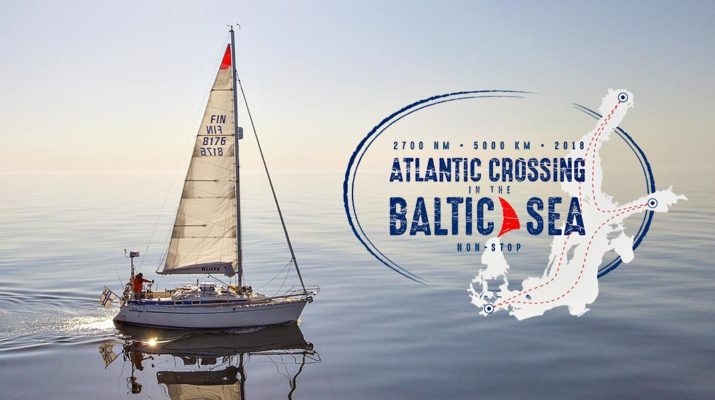 What is your impression of the Baltic Sea? Easy in-shore sailing or a tough off-shore challenge? Finnish sailor and adventurer Kari “Ruffe” Nurmi wanted to find out. He decided to do an “Atlantic Crossing” by sailing 2700 nautical miles non-stop in the Baltic Sea.  2700  NM is roughly the distance from the Canary Islands to the Caribbean, so a true Atlantic crossing indeed.

When Ruffe gets an idea, you can be pretty sure it gets implemented. On May 30, 2018, Ruffe and his companion Esa Kekki left the HSK yacht club in Helsinki to start their journey. 26 days later, on June 24 just before midnight, they returned to the same place having successfully covered 2700 NM without going ashore. 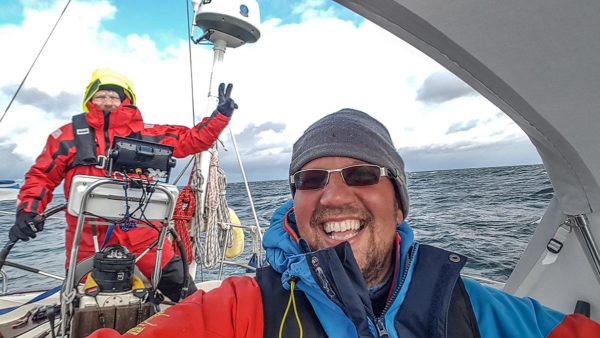 The route was quite simple, they simply rounded 3 lighthouses marking the southern, northern and eastern extremes of the Baltic Sea. From Helsinki, the two adventurers set a course for the lighthouse guarding the entrance to the Kiel canal at the southern-most part of the Baltic. From the Kiel lighthouse  they steered north up along the Swedish coast towards the northern-most part of the Baltic, the Bay of Bothnia. Here they rounded the Kemi lighthouse. From this northern-most turning point, the boat headed back into the Gulf of Finland and the last turning point, the Kotka lighthouse at the eastern extreme of the Gulf of Finland from where they then headed back to Helsinki. 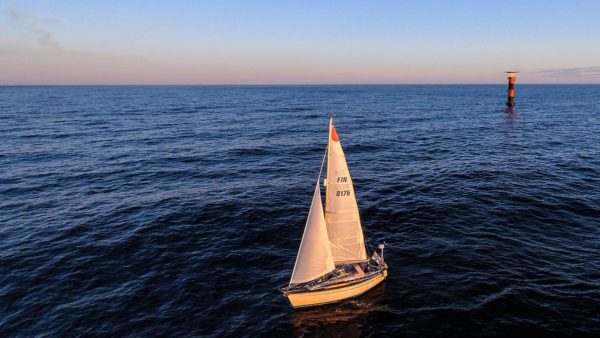 The northern most point of the trip; Rounding Kemi lighthouse at sunset.

What kind of boat do you need to “cross the Baltic”? 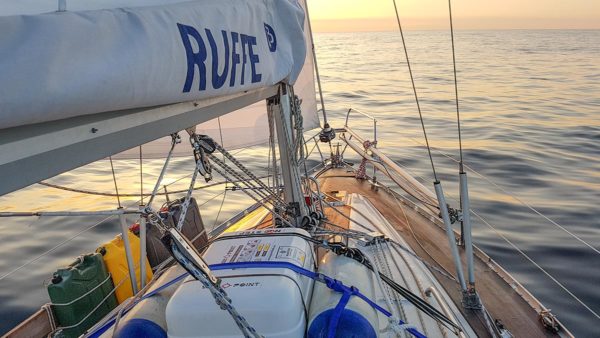 A calm day at sea. Extra jerry cans for fuel stowed on deck.

Ruffe and Esa sailed a 29 years old Bavaria 300. The boat is named s/y Ruffe, you can perhaps guess after who. Kari has used to boat for some of his other adventures, including sailing to the Svalbard islands so it had proven itself in terms of construction and sea-worthiness.

s/y Ruffe is quite typical for the boats used for cruising in the archipelagos in Finland and Sweden. You will meet plenty of boats this size and even smaller in the marinas. For two people, it still offers plenty of space but there are some challenges with storage, especially of water and diesel. Normally of course you don’t face those problems sailing in the Baltic as the closest full-service marina is normally no further than 50 NM away and most of the time much closer. 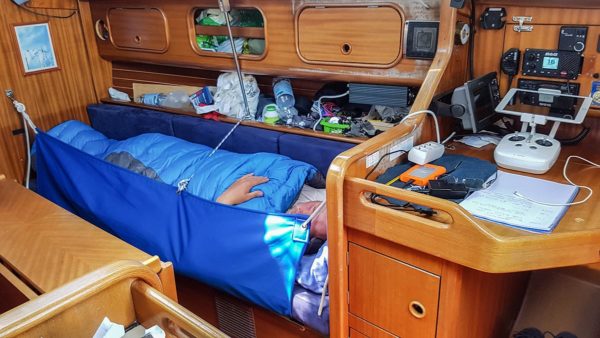 Sleeping in the saloon in storm beds.

Every kind of weather

The trip proved to be far from a walk in the park (can you say that about sailing :-)? ). The Baltic Sea showed how varied the conditions can be even in the summer. s/y Ruffe met every kind of weather, starting from dead calm (and motoring) all the way up to storms with 18-22 m/s (35-45 knots) winds and heavy, breaking seas.

If you plan on sailing in the Baltic yourself, it is good to know that whether forecasts are quite reliable and strong winds should never come as a surprise if you plan ahead and check the forecasts. Normal sails in the Baltic tend to be day sails with typical crossings not requiring more than one night out.

A different type of midsummer: heavy winds outside Estonia.

When comparing his experiences sailing in the Atlantic to those sailing long distances in the Baltic, Ruffe noted that conditions varied a lot more in the Baltic. With a small crew, the Baltic proved to be quite tiring as sail trimming and changes happened very often. Most of the time steering was handled by an autopilot, but during the heaviest weathers, the crew steered themselves as the autopilot did not really do a good job in handling the rough seas. There is so much shipping on the Baltic Sea that the boat still needed someone on deck all the time to keep a look-out.

From a visitor’s perspective, I think this is one of the best sides of sailing in the Baltic. There is always something to do: sail trimming, navigation, watching the ever changing scenery and check out the other boats. It’s a lot more “active” sailing than trucking along for several days in the same wind, not seeing anything else but the horizon.

Summer nights in the Baltic are never totally dark.

Doing science for the Baltic Sea

The expedition was not just a sailing adventure, it also included a scientific part. The crew tested a new type of device used to collect water samples to help analyze the effect of micro-plastics on the Baltic Sea. Much more so that the oceans, the Baltic is a very fragile and sensitive body of water as it is very shallow and almost lake-like in many ways. Therefore it is very important that sailors coming into the Baltic also take good care of the sea!

Collecting water samples with the device towed behind the boat.

With the longest ever single sailing trip in the Baltic now behind him, Ruffe seems very happy he did the trip. Staying out for an extended period of time really showed the many faces of this highly interesting sailing region. Despite the occasional heavy weather, the trip for the most part of nice and comfortable in light to medium winds. Just to illustrate the benefits of sailing in the Baltic, Ruffe was taken to hospital for appendicitis just a couple of days after he arrived back in Helsinki. Had this happened during the sail, s/y Ruffe and crew would have been within airlifting range during the whole trip. Just one more example of how safe a sailing environment the Baltic really is.

Let’s see what project Ruffe will undertake next! 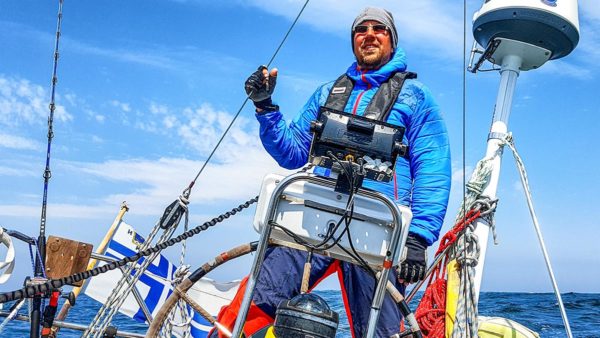 Ruffe looking out for his next adventure!